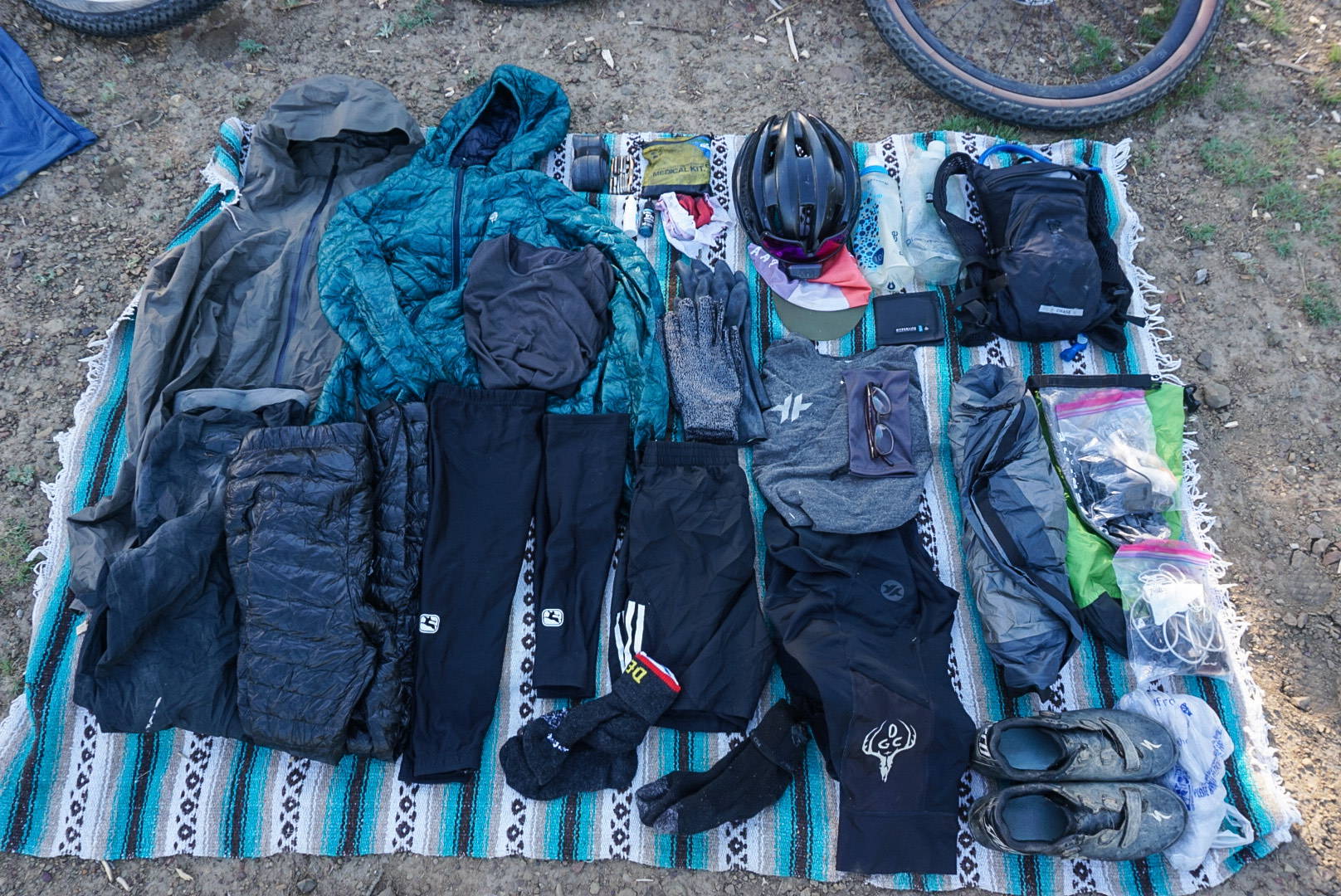 It’s Friday, July 1st and my Waheela C is loaded down with half a pizza in the wedge bag, a handful of cheesy sticks in the top tube bag, and enough gear and clothing to dance my way through the mountains from Fort Collins down to Trinidad. Everything I need, and not much more. It’s an alpinist's approach to an ultra-endurance bike race.

North South Colorado is a route through the Rocky Mountains incorporating roughly 300-400 miles of gravel, around 200 miles of pavement, and a hearty 25-30 miles of singletrack. There’s a resupply available every 100 miles or so, meaning a “light and fast” approach is totally doable for those looking to play games on the pointy end of the race field. “Gravel” is a loose term, which can translate to “chunky-ass mountain passes” at times with rocks varying in size from toasters to mini-refrigerators. A mountain bike may be the ideal selection for many, but I found the Waheela C’s ability to fit XC sized tires while maintaining a more traditional gravel race geometry would allow me to put some serious time into the climbs and pavement sections of the route. 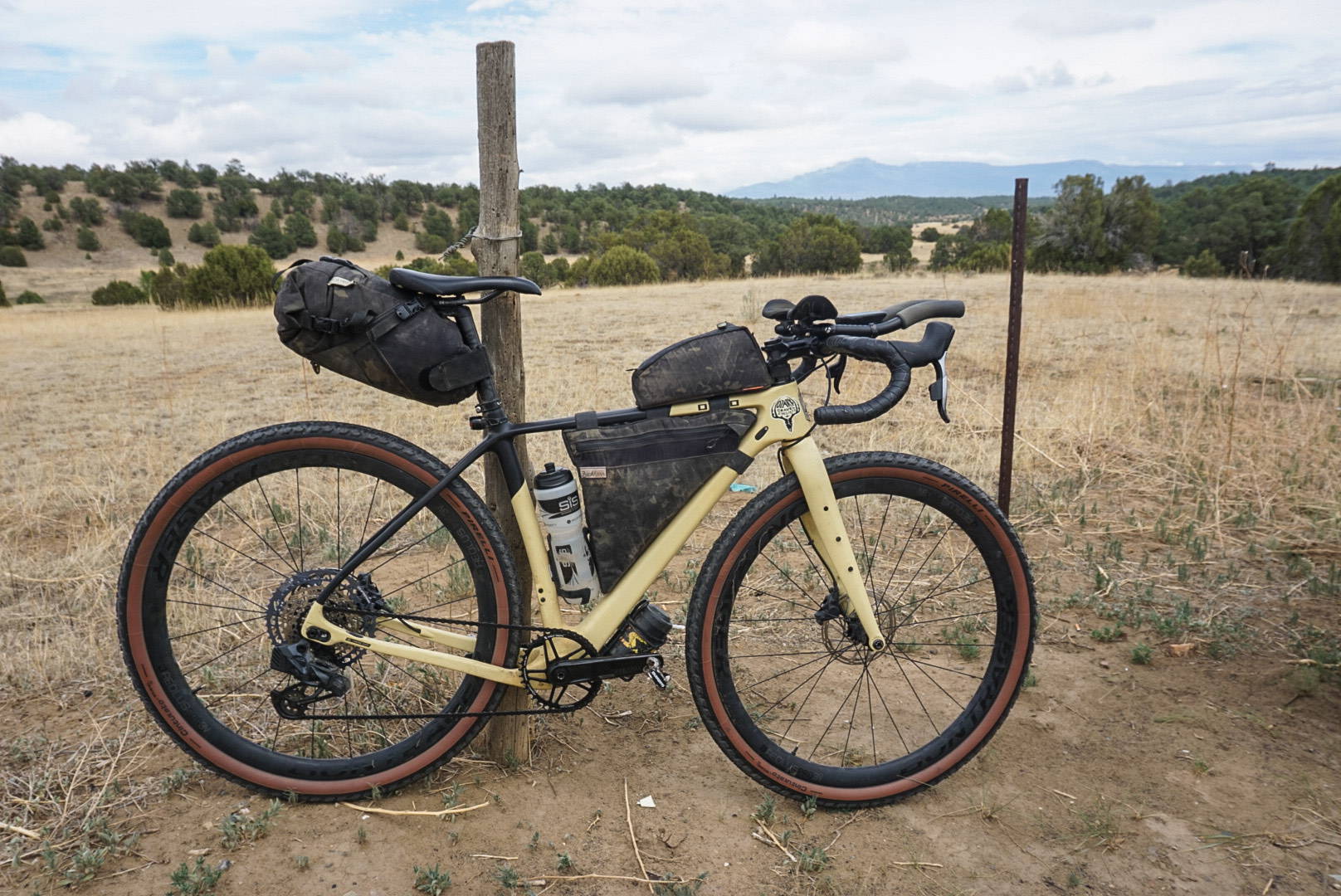 Rolling out of town and into the first 60 miles of riding, it became evident that Anton Krupicka would be the main character to look out for. A world renowned ultra-runner and mountain athlete who has been incorporating a lot more cycling tours and days on the bike into his regimen, Anton is a Colorado local that knows many of these roads and plays at high elevation on a day-to-day basis. We chatted and rode alongside each other for a while, talking life and about the miles ahead. Neither of us brought a sleeping bag and neither of us had much of a gameplan apart from “let’s see what happens.” It’s an organic and natural approach—one in which I respect deeply from someone who’s been such an icon in ultra endurance sports for so long. More focus on the overall experience than executing a prescribed plan.

At 106 miles in I found myself in first place but stopped at a tiny gift shop & general store in Gould for my first resupply. At this point I had polished off most my pizza and had no desire to finish off the last of my cheesy sticks. I was relieved to find an ice cream sandwich, some Frito chips, Gatorade, and an assortment of sugary snacks. I took my time and chatted with the owner and a couple locals, explaining the bike shenanigans taking place. I ate and drank some in the shade of the small cabin and went on my way. I figured I was still in first but didn’t bother to check Trackleaders—still too early to be thinking about that kind of stuff. I made a conscious effort before beginning the ride to keep my phone on “airplane mode” apart from the occasional DOT watching to feel more immersed in the experience. 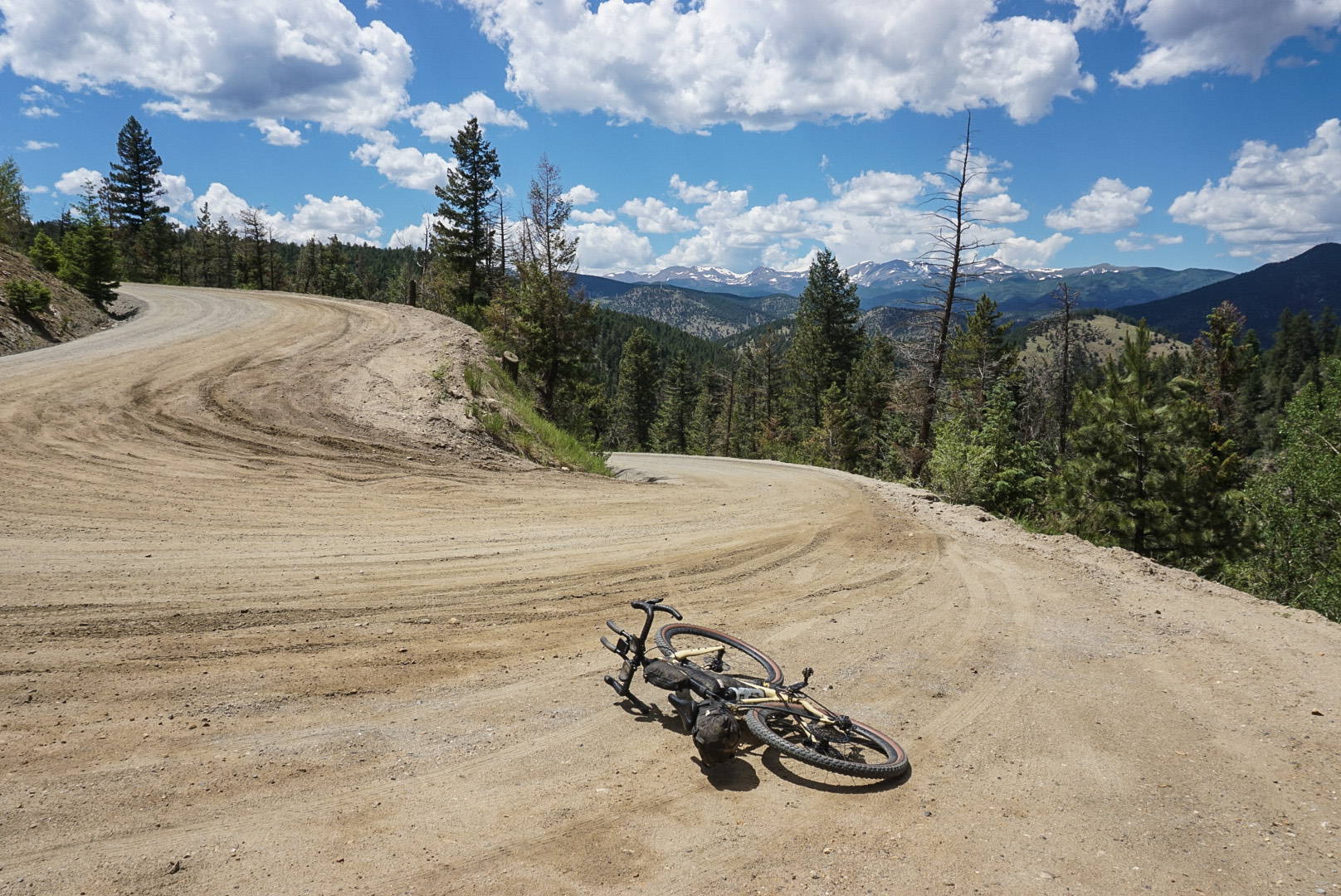 Apart from one chunky descent before Gould, the terrain was relatively ripping fast and I was holding close to a 15mph average, admittedly a little too ambitious for my current fitness and sea-level lungs. Excitement always takes hold at the beginning of these events, no matter how much I try telling myself to conserve and start calm. Flooding the senses with new terrain and incredible views gets me giddy every damn time.

Granby was the first “proper” town and where I checked Trackleaders for the first time as I sat outside a Kum & Go gas station. Anton had snuck ahead during my resupply in Gould and was making his way through the first singletrack section while quickly approaching the infamous Rawlins Pass. This was my first time riding singletrack on the Waheela C and I was pleasantly surprised with its ability to feel light and nimble while navigating tight, rocky turns between aspen trees (especially while loaded down) while still maintaining confidence. 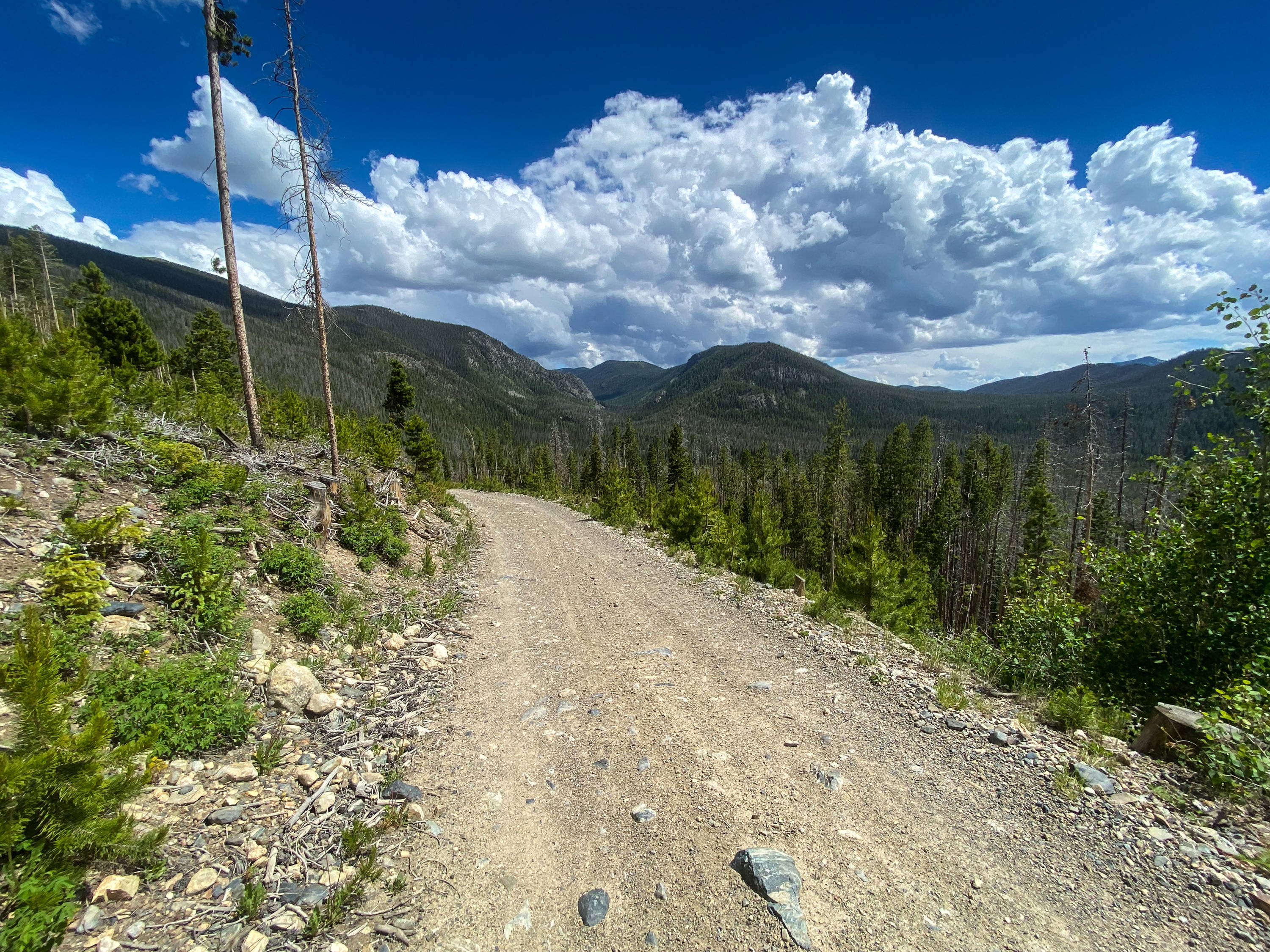 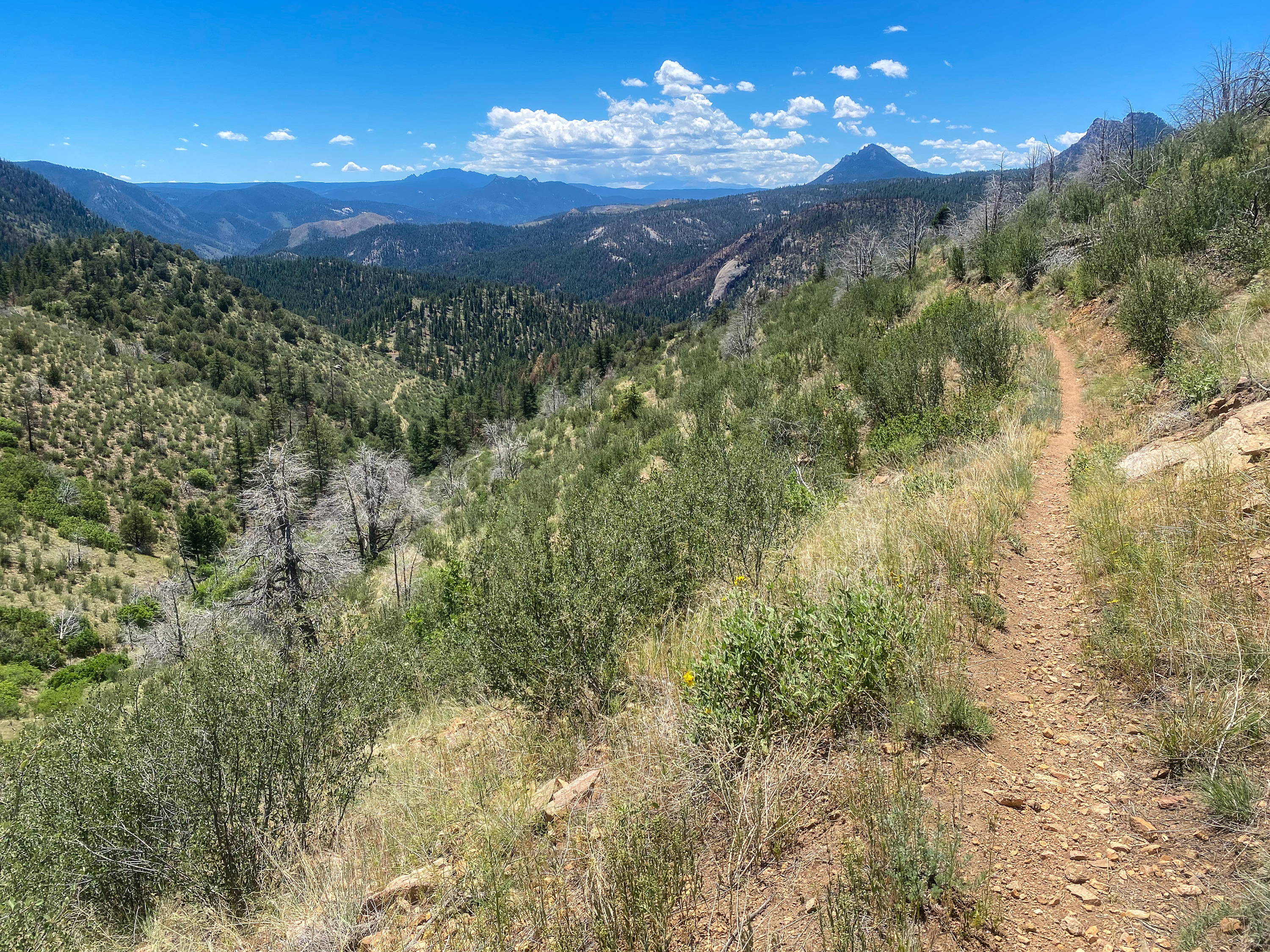 Going up Rawlins Pass is when I really began feeling the effects of altitude and proceeded to do much more hike-a-bike than I would’ve preferred considering its rideable surface and steady, mostly mellow gradient. As the sun set, I put on several layers including my down jacket and wool gloves. Nearing the top, I was surprised to be doing some hiking through the snow—a far cry from the Arkansas summer I had just left behind. The descent was something I’ll never forget, even if seen just from the small light bubble of my tactical light attached to my bike. Chunk galore, more snow, streams of run-off straight down the road, old wooden bridges with serious exposure, and a few bits of picking my bike up over massive rocks. I got rattled to the bone and had to stop to shake my hands out several times. By the time I got to the bottom I desperately wanted a nap and mental reset but pushed over one more horrendous climb and descent before getting to Central City around 3:45 a.m.—roughly mile 225. I chose a stealth bivy spot near a government building in town next to a bush and put on all the layers I had. Before choosing my alarm time, I checked Trackleaders again and was pleased to see Anton was also in town sleeping. He had a few hours already in the “bank” so I justified 2 hours to stay within arm's reach.

The next day was an emotional roller coaster. The views were always incredible, but the heat was getting pretty serious. I saw everyone on vacation mode for the 4th of July weekend swimming in rivers, drinking beers, and lounging around in the shade. Stopping sounded so appealing but the lure of chasing an athlete like Anton was the carrot I needed. The Pike-San Isabel National Forest was my low-point of the ride and where I began to question my motives for the race. Albeit absolutely beautiful, this section was extremely exposed to the sun and had so many long, drawn-out climbs that I found myself walking constantly. I was out of water for hours was convinced that the next real town I’d arrive at I would get a motel for the night and just “tour” the rest of the route. It’s a slippery slope when you start justifying slowing down.

Alas, I got to Lake George at Mile 330 and missed the time window for the resupply. I stood outside at a loss, questioning my next move. After about 5 minutes I was surprised to see the owner come out of the store and chat with me for a bit. He gave me an expired package of Oreos and half a water jug that Anton graciously left behind. Before I knew it I was on my way; the kindness of another human was all I needed in that moment—too many hours in my own head, doubting myself. No motel stop, we’re still racing and have ground to make up. 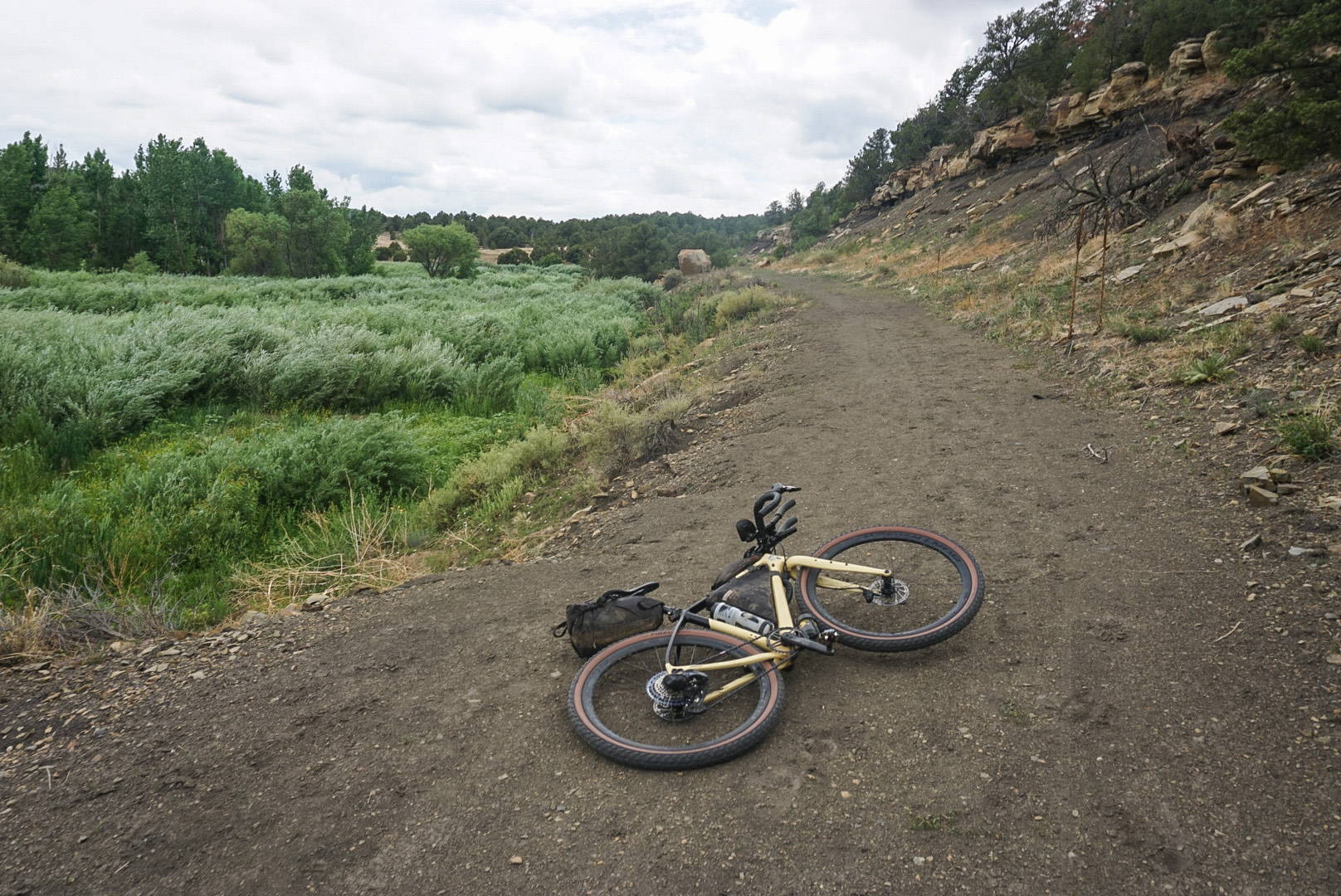 I got rained on some from that point and knocked out another major climb up to Cripple Creek and descended one of the most all-time gravel roads I’ve ever experienced—Shelf Road. Even though it was in the dark, I was blown away by the roller coaster turns, cliffs, and drop-offs through the canyon into the abyss. Hitting washboard sections at 30-40 mph in the night is a humbling experience but luckily the Waheela C’s confident, “point and shoot” descending held the line even if my eyes were rattling to the extent of barely being able to see straight.

I pushed to Cañon City, my first real resupply in a very long time. I walked around like a bit of a zombie in the gas station and settled on a sandwich, Lunchable, chips, energy drink, smoothie, and assortment of whatever else seemed appealing. I sat on the sidewalk, feasted, and watched people drunkenly stumble from the bars. It was approaching 2 a.m. so last call must have sent the small crowds on their way. I pulled up Trackleaders again and saw that I overtook Anton’s position in the night, gaining first place. He had already been sleeping for many hours and I tried speculating how many more he’d go for before getting up and making the last push to Trinidad. Considering how he’d put some solid time on me in that second day I knew that with a lot of sleep and recovery there’s no way I would be able to hold the same pace as him for the final stretch. In that moment I knew that sleep was out of the cards for me; I needed to grow the lead as much as I could and see if it was enough to hold him off.

Another long climb led to a ridiculously muddy ridgeline where I carried my bike for entirely too long, battled a chain that wouldn’t stay on, and repeatedly scraped the tires so the wheels could rotate when the road was slightly more manageable. I battled headwinds through the valley afterwards and nodded off in the morning sun. I was losing all energy at this point and eventually laid down in a ditch for a nap at around mile 430. I kept my helmet and hydration vest on, set an alarm for 20 minutes, and woke up with 9 minutes to spare. A dream jarred me awake and I guess I got the mental reset my brain needed. I made decent time through the day and frequently shuffled music trying to find anything that kept my spirits alive. 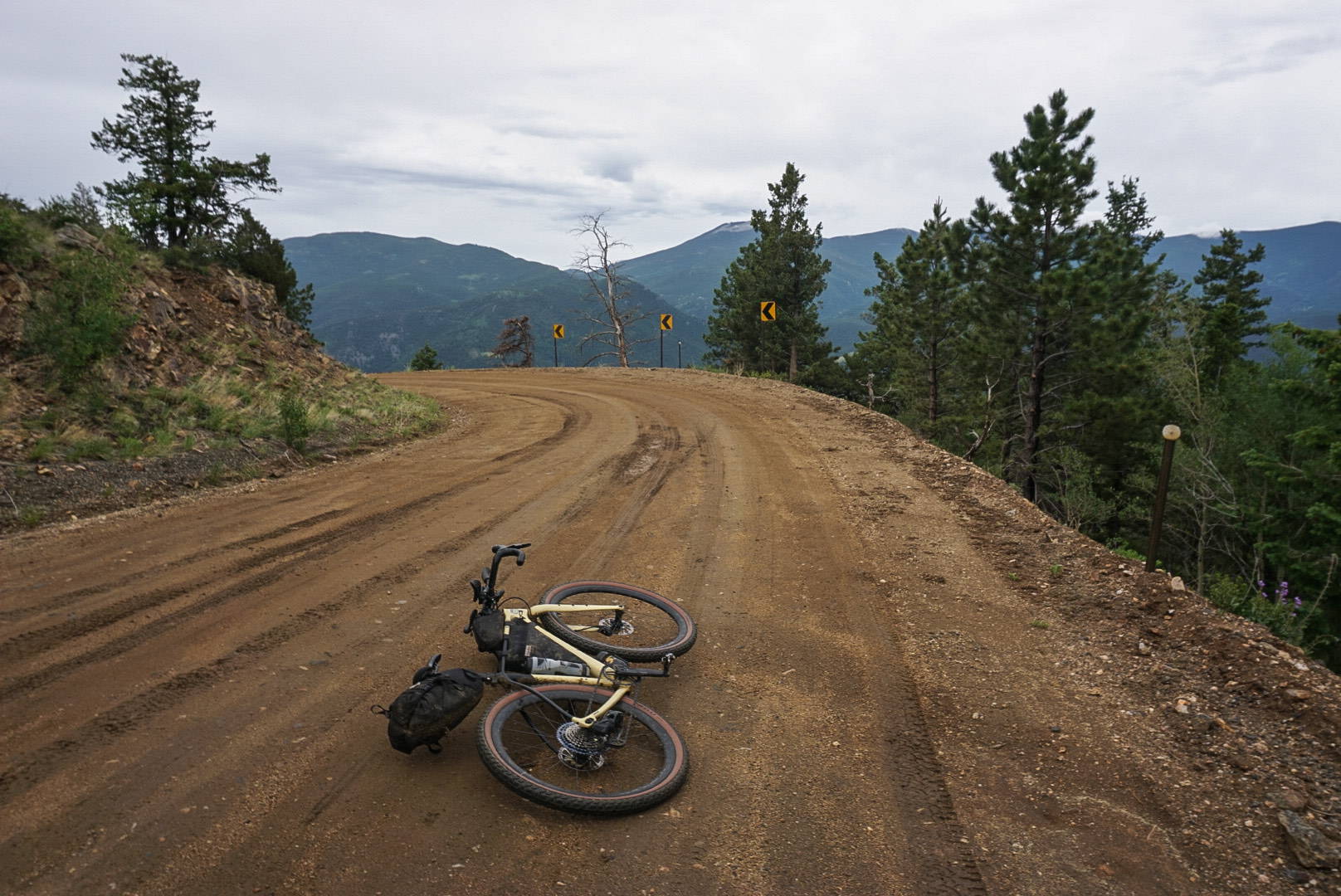 In Farista I had Taco Bell—Crunchwrap Supreme, 2 Hard Tacos, and a Chicken Quesadilla. Some more DOT checking, some weather checking, and some staring blankly at a wall while surrounded by a bunch of families. By La Veta I had to put on all my rain gear and I was riding straight towards Cordova Pass, which was shrouded in a blanket of storm clouds. Anton was making good time and gaining ground on me so I knew that I needed to put in an honest effort to the finish line—no lollygagging around pouting about the rain. This was by far the most exciting part of the ride for me and felt like a grand finale dash for the finish. At the top of Cordova Pass at over 11,000ft I took shelter in the pit toilet for a moment and checked Trackleaders yet again, blown away to see there was no movement from Anton since I last checked hours prior. This is the first time I checked my messages and I found out that he had unfortunately dropped from the race due to mechanicals.

A bit of sadness overtook me not having Anton biting at my heels anymore. No high-five at the finish line, exchanging of wild stories, or the opportunity to thank him for making the ride such a blast for me. However, I smiled and pedaled away at a quick clip knowing that I was almost done and had first place in the bag. 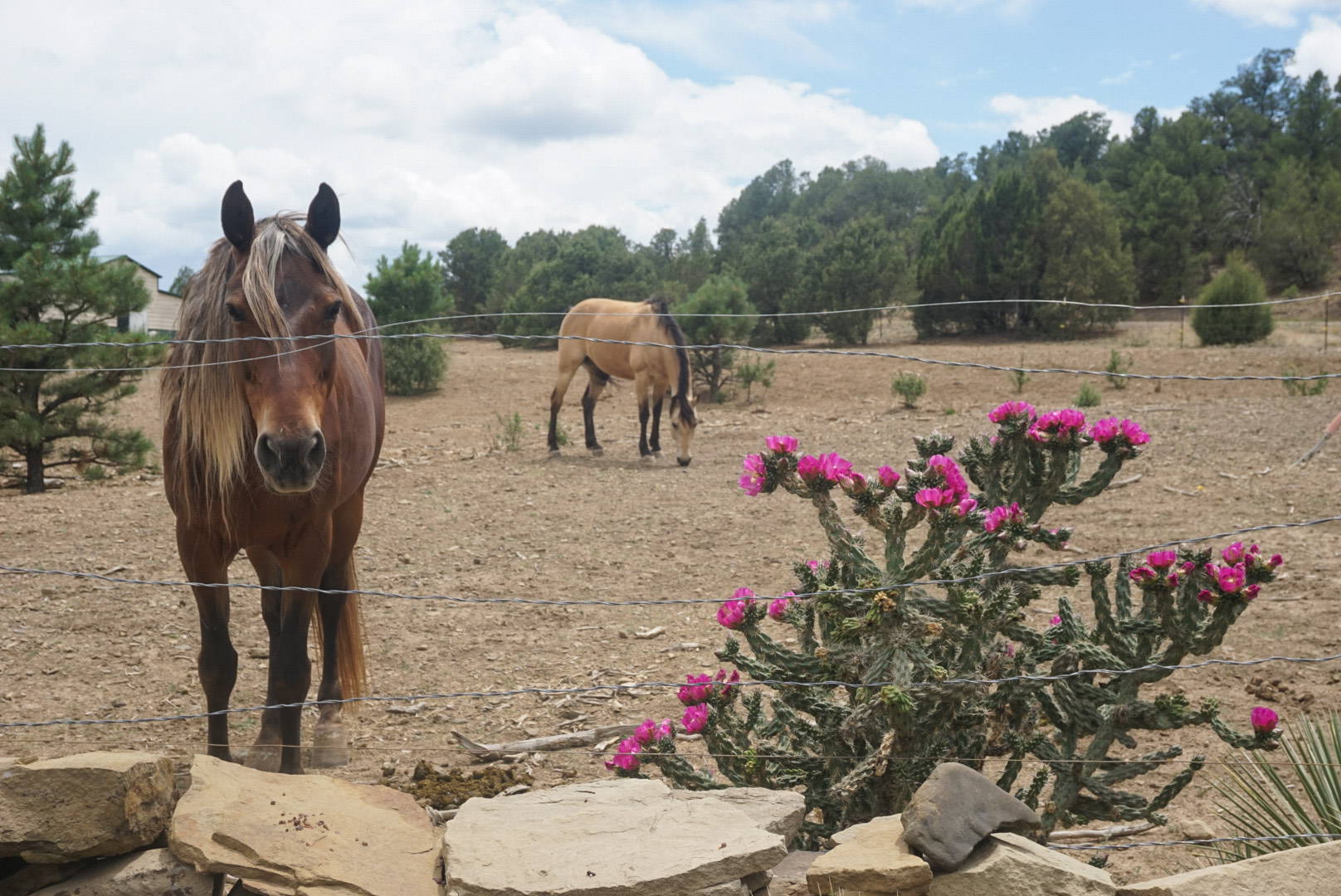 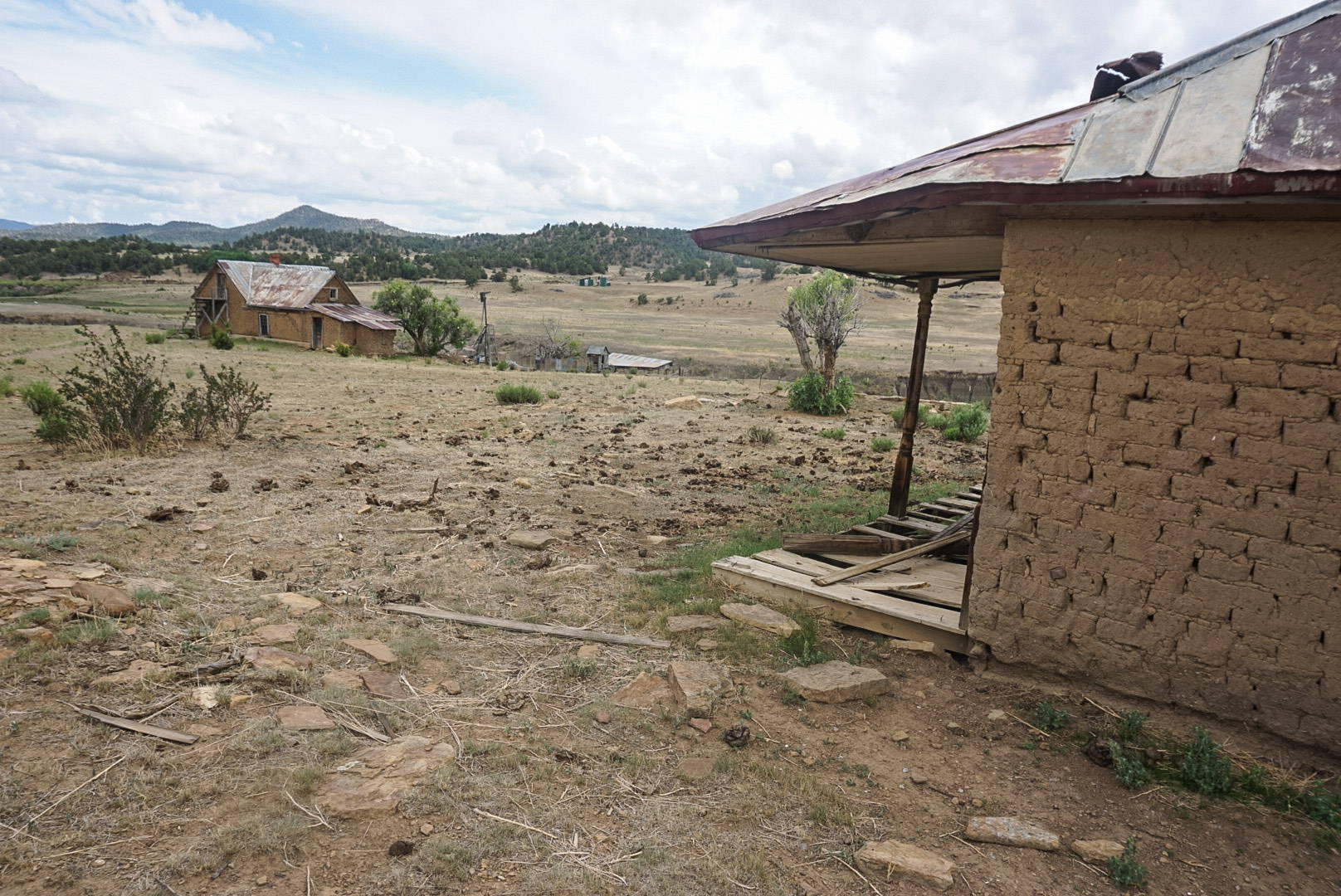 I rolled into the finish at 11:44 p.m. greeted by Mark (route creator and race director) and his wife with a massive smile on my face. What an incredible ride and experience. Gravel, mountain passes, singletrack, pavement, thunderstorms, crazy heat, snow—this had it all. 2 Days 17 Hours and 44 Minutes to ride across the state of Colorado through the mountains on just over 2 hours of sleep total. A ride of a lifetime. No mechanicals, just some excessive mud once and a dead AXS battery early on.

North South Colorado is a beast of a route and truly puts your equipment and willpower to the test. Would I have changed anything if I did it again? Slap some 2.2 tires instead of the 50c tires that I used and that’s it. The beautiful thing is that the Waheela C can do just that. Fast, compliant, stable on the descents, nimble on the flow, and just looks damn good too. It’s a rocket machine and I’m stoked to see what I’ll have the opportunity to do on it next. 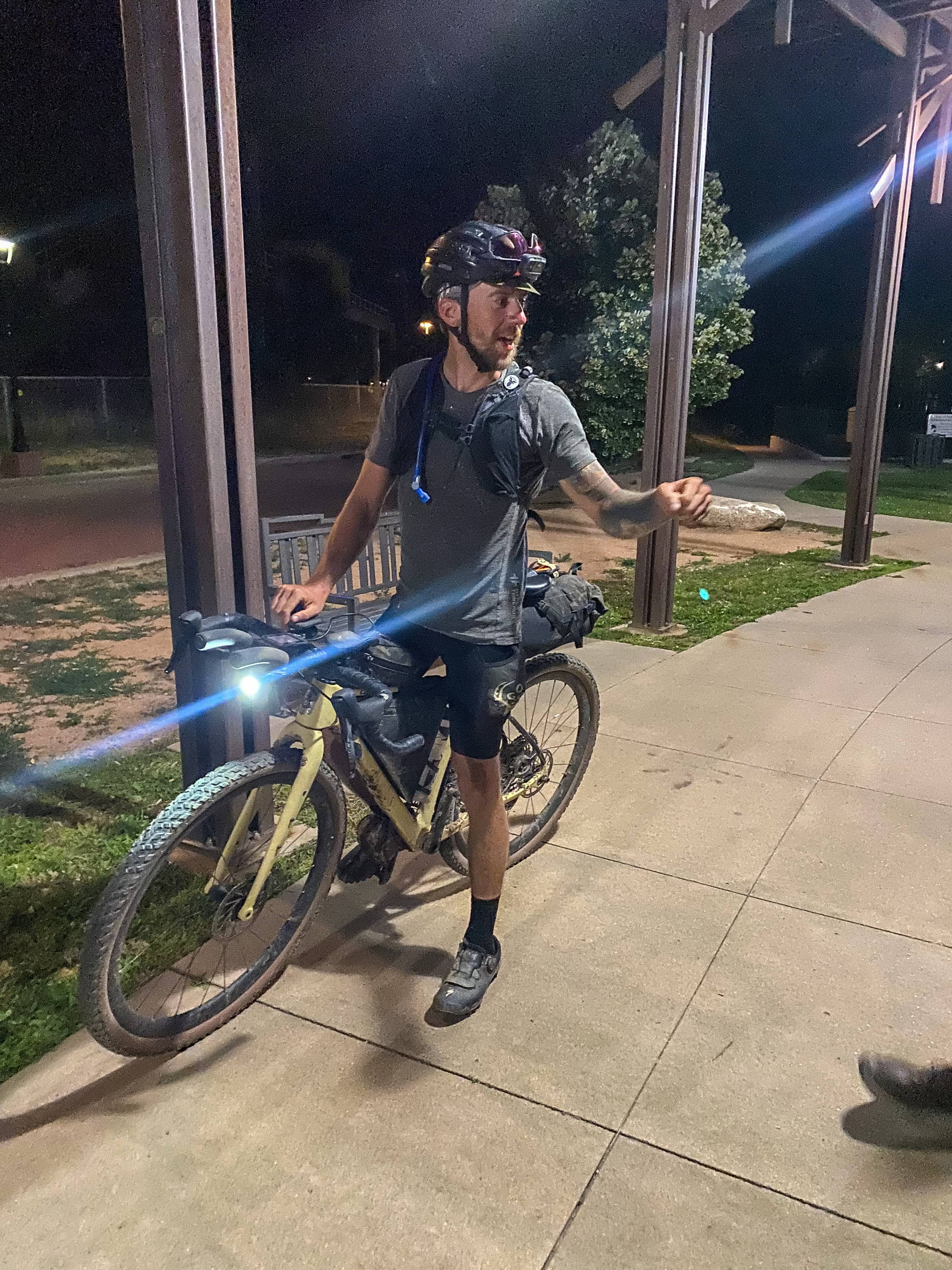 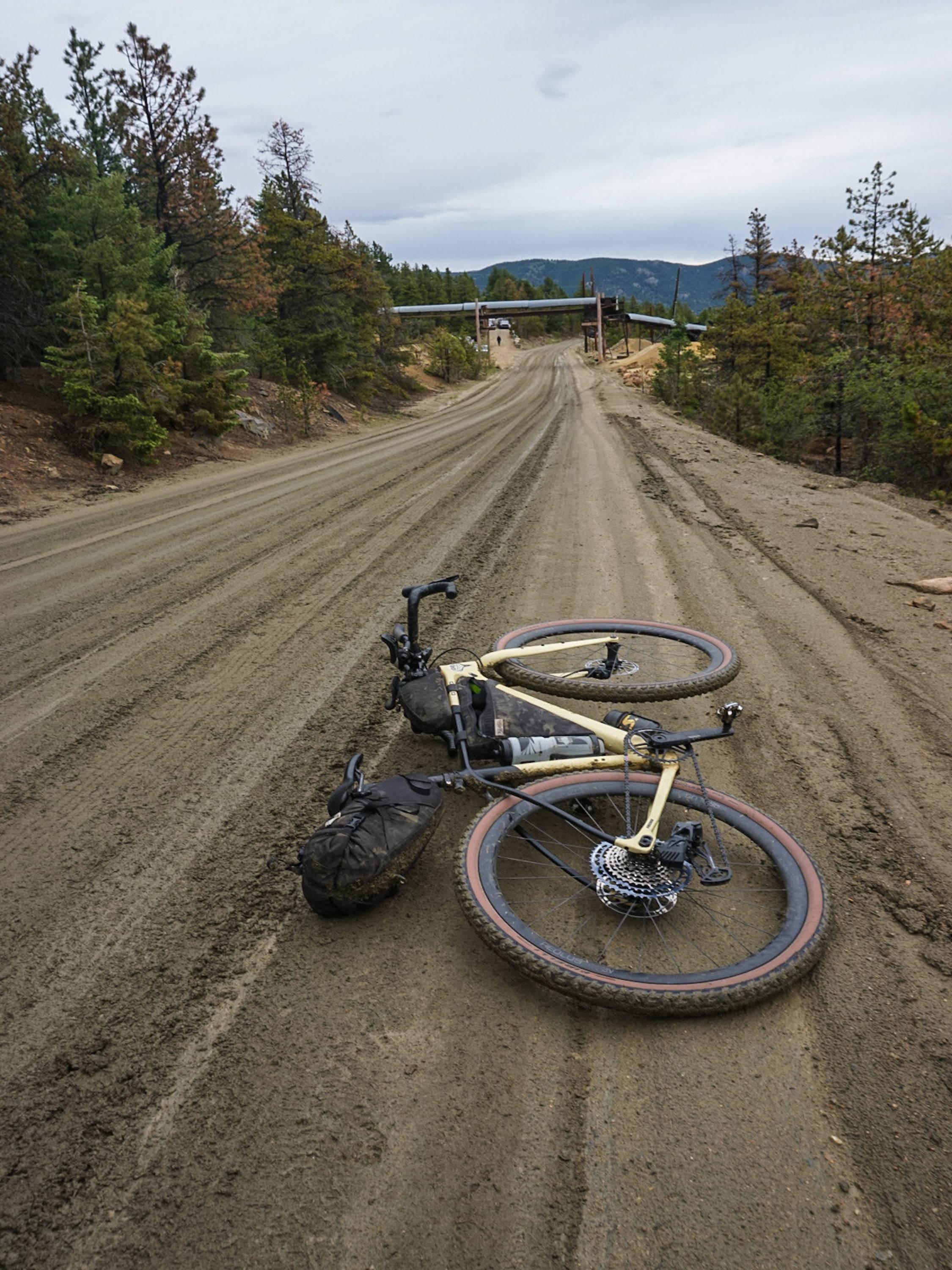